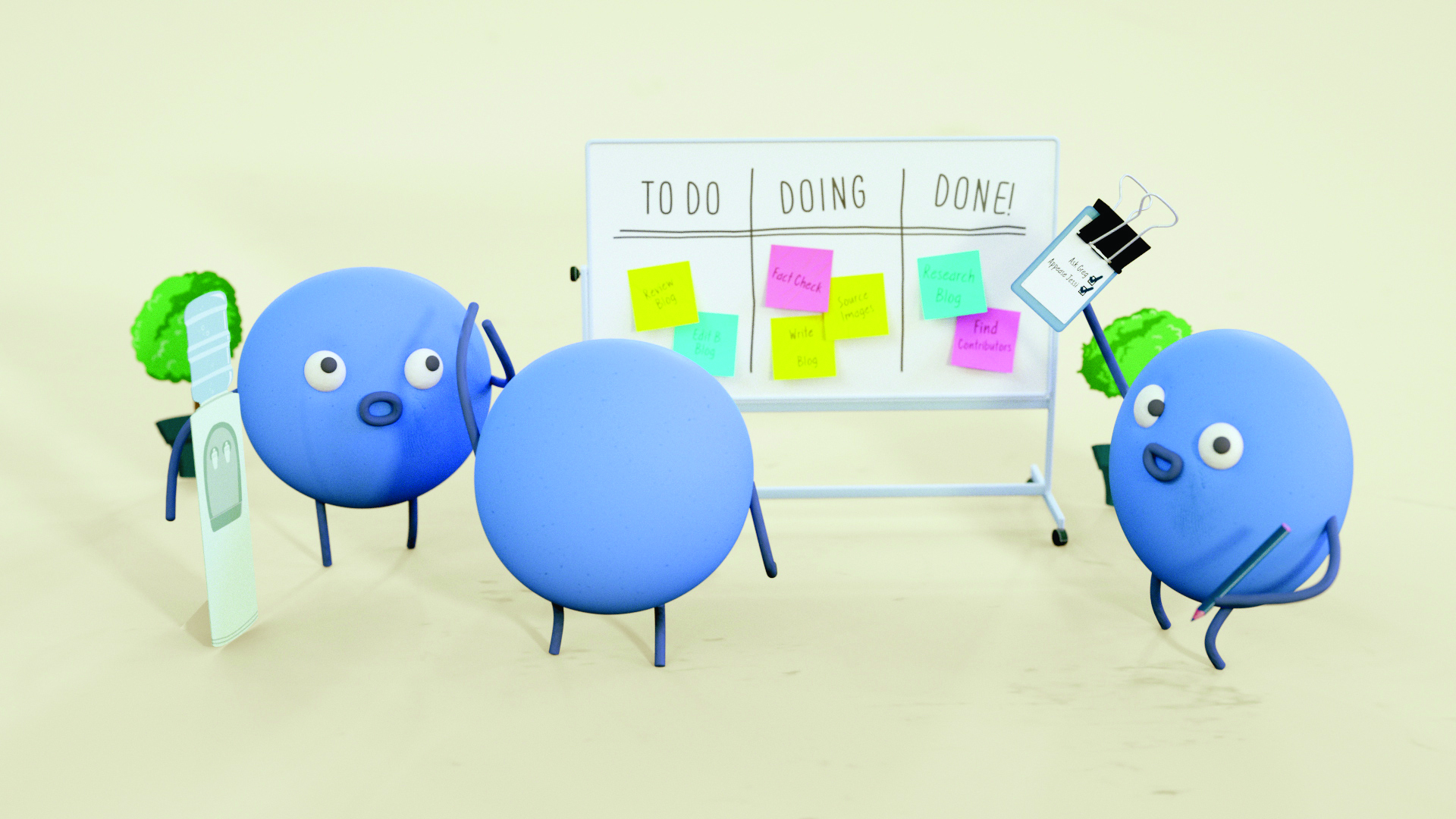 Why Be Agile? Learn how to think like an agile leader

Why should you adopt agile ways of working? Agile Coach Christina Ohanian and Scrum Coach Geoff Watts discuss why leaders and organisations have to take advantage of the opportunity to learn, how to think like an agile leader, and the benefits of becoming agile.

According to the World Economic Forum, the world of work has changed a lot in the last 100 years. Rapid technological changes have shifted the frontier between the work tasks performed by humans, and those performed by machines.

As a result, organisations now exist in a state of VUCA: Volatility, Uncertainty, Complexity, Ambiguity – a term initially coined by the U.S. Army War College.

In the past, leaders assessed risks and mapped out responses with a risk-management strategy. But today, organisations must cope with an environment that is constantly changing.

For leaders, the only solution seems to be to expect change. And many businesses are now turning to Agile ways of working, and looking at how they can adopt this approach – not just in their tech teams, but also in their leadership.

Why businesses are adopting an agile approach

Circus Street’s Scrum Master & Agile Coach, Christina is passionate about building and supporting self organising teams and individuals from the ground up. She sat down to speak to Geoff Watts, the founder of Inspect & Adapt Ltd., to discuss why more and more businesses are adopting an agile approach.

He has a lot of experience in the matter. In fact, Geoff is one of the most experienced and respected Scrum coaches in the world. Having started using Scrum at British Telecom, one of the first large-scale agile adoptions, he has since coached organisations large and small through their agile journeys.

Geoff explains that in the past, a lot of companies spent a lot of time and energy trying to protect themselves from change. And according to Geoff, it’s a waste of energy that could be better spent by harnessing that change – or even being at the forefront of change.

The importance of being agile

There’s plenty of research to back up Geoff’s theory. For example, Harvard Business Review found that the ability to adapt is the most important skill for companies undergoing a digital transformation – more important than technical know-how, communication skills or even customer-focused problem-solving.

Further research has shown that organisational agility can provide a powerful source of competitive advantage. According to PMI, these benefits include:

How to be agile

According to a report from McKinsey, there are five trademarks of an agile organisation:

A large part of the Agile approach is reframing traditional work structures in order to enable quick delivery. And, according to Christina, this is absolutely critical.

“I think, in this day and age, if you’re not out there, it’s not quick enough, and your company very much could cease to exist, to a certain degree,” she says. “There’s so much competition out there.”

Because of this intense level of competition, companies are often faced with the decision to make a change to their product or services, even if they are performing quite well. The trick is to avoid becoming complacent.

“If you think about the big players, for example – Facebook, Amazon and Google – these companies are putting new things out there very quickly, and they’re not even perfect – they’re just ideas that they put out into the world,” Christina explains.

“What I always find interesting is that they put a new idea or product out there, they see what happens with it, and then they adapt to it quickly. I think that, for me, is what agile has the advantage of bringing out from certain organisations,” she says.

There are several examples of companies that have succeeded by pivoting early on. For example, Slack was built as a tool to help its founding team build another product – a game. Early testing showed them that the ways of working they were using resonated more than the game itself – so they ran with it.

By being agile, companies like Slack have been able to pivot and scale quickly. Simply by being open to change, and quickly adapting your product, you can start to think like an agile leader.

“There’s a really powerful part of Agile which I find that not very many organisations explore,” Christina says, “– and that’s the continuous learning aspect of it.”

The phrase “continuous learning” may conjure up buzzwords such as continuous improvement, continuous delivery – but the concept also touches on other important aspects, such as failing fast, and utilising feedback.

“You’ve got to take advantage of the opportunity that you’re giving yourself to learn. By doing something small and quick, you’re learning. You’re learning whether you’re doing the right thing, whether you’re doing it in the right way, whether it’s going to be valuable, how you’re going to go about doing things, and how you can get better at doing them. All those opportunities are there,” Geoff says.

However, he also sees it as an obligation: “If you’re not taking time out to reflect and adapt, you can just be building the same thing, and you’re abdicating your responsibility to get better at things,” he argues.

“We have an opportunity at the end of every iteration to get some feedback about what we’re doing – okay, it might not be comfortable to learn that it’s not perfect, but it’s an opportunity to get better.”

How to be an agile leader

“Being Agile isn’t just about teams – it’s also about individuals,” Christina says. “The idea that you can take feedback and learning to improve yourself and the capabilities of the team, it’s so valuable and powerful – and it’s so underrated.”

If you’re in a leadership position, you may be wondering how you can become more agile. First of all, Christina advises leaders to take a more agile hands-off approach:

“For me, agile leadership more about facilitating a conversation, as opposed to managing and making decisions within that conversation,” she says.

Geoff agrees with this style of hands-off leadership. “If I’ve got good leadership, I can be much more effective at self-managing. And if I’m effective at self-managing, I need less management, which leaves a lot more room for these traditional managers to provide more leadership,” he argues. “In an Agile environment, I can see that delivery quite easily, quite quickly, on a regular basis. So I don’t have to manage by timesheet, I can manage by delivery.”

One of the things that Christina is very passionate about, and she tends to drive in organisations that she’s worked in, is carving out spaces to work and reflect on your results. Personally, she recommends the Scrum framework: “If you’re using Scrum, naturally there’s a built-in retrospective that allows you to stop and reflect and adapt on the past iterations,” she says.

“But some frameworks don’t necessarily have that built in. So how do you carve out that time? I think this is a question that arises when you’re transitioning from traditional to agile: How are we learning? And what are the areas you want to try to change and improve?”

However, according to Christina, the most crucial part of becoming more agile is asking for feedback – and learning to adapt from it.

“From my own experience, I inspect and adapt on a regular basis. As a coach and scrum master, I’m constantly asking for feedback,” Christina says. She asks herself: “How did this go? Was that meeting facilitated in the best way possible? Could I have done something better?”

“I always say that you never stop learning,” she adds. “Every opportunity is an opportunity to learn.”

Why should you adopt Agile?

We asked our two experts: If you were to pick your top three reasons why a company should adopt Agile, what would they be?

“Firstly, I would say getting optimal ROI,” Geoff answers. “Finding out where the value is, doing more of that, and doing less of the stuff that doesn’t add you value, and getting that value sooner.”

“The second one would be around innovation and responding to change,” he adds. “So getting into a habit and creating a culture of being responsive and trying new things, and working out what works and what doesn’t work.”

“And the third,” he finishes, “– would be making the most of the people that you have in your organisation. Harnessing their talent, their innovation, their creativity, their passion, and their intrinsic motivations.”

“It’s about people, about value, and about resilience,” Christina adds.

Besides, there’s an incentive to adopt an agile mindset quickly. According to one study published in McKinsey Quarterly, companies with poor change-management capabilities have the lowest returns.

However, companies with strong change-management capabilities gained strong returns. In some instances, they exceeded expected returns by as much as 200-300%.

At the end of the day, if you’re still asking yourself whether to adopt agile ways of working, it simply becomes a question of following the numbers. And the rewards by far outnumber the challenges.

As a global online learning business, we help organisations navigate the uncertainties of technology-driven future by building their digital capabilities – and become more agile.

To find out how Circus Street has empowered organisations by building their agility, see our testimonials page. Or sign up for a free trial of our lessons to see how we can help drive the digital capability of your own team.

Find out more at www.circusstreet.com.