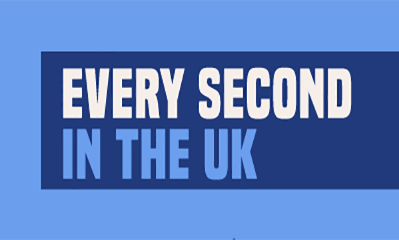 Here's What Happens Every Second Online In the UK (Infographic)

As much as us Brits love to complain, the fact remains that the UK's digital economy is flourishing. Despite this initial success, we need to take action now to ensure we can build on this growth. Problems such as the lack of digital skills, and poor infrastructure prevent both the UK’s tech industry from succeeding and individuals from accessing the amazing opportunities that digital can provide.

So with this in mind, we decided that showing off the many, many things that happen in a single digital second in the UK would be great way to show off the Brit Web, and encourage people to take action to ensure it’s future success.

And now the numbers

We started with looking at the value of the Tech industry as a whole. The Tech Nation report for 2016 (1) sets the combined turnover of the UK Tech industry as 161 billion pounds in 2014 . That’s over £5000 in revenue per second (2). So every second, the tech industry makes roughly 3 months’ worth of the average person’s take home salary (3).

But what the internet giveth, the internet can taketh away. As the world's rich and powerful have come to appreciate in past weeks, internet security is becoming an ever more pressing issue, and security failures ever more devastating (4).

Figures from the 2015 Security Breaches Survey (5) as well as some statistics from the House of Commons (6) allows us to make a rough estimate of both the proportion of companies affected by data breaches and number of data breaches amongst organisations of different sizes. This shows us that UK businesses will only have to wait for a couple of seconds to pass on average before losing some data.

What is slightly easier to estimate however, is the cost to the economy. The Telegraph reported last year that cyber-attacks may cost all of UK industry as much as £34 billion per year (7). This gives us a figure of around 1000 pounds per second draining out of the economy, and potentially funding further crime in the UK and elsewhere.

According to recently published research, the average European business uploads 5.6 terabytes of a data a month to the cloud (8). With around 5.4 million businesses in the UK, if all of these upload the average amount of data that give us a total amount of data uploaded at around about 11.5 TB per second.

11.5TB is still pretty big- more than four times as large as the millions of files in this weeks “biggest ever data leak�?. If we think in terms of old style 1.44 MB floppy discs, then the UK as a whole would need approximately 150 tons of the things every second.

The Daily Mail reported that, at least as of 2013, the average UK worker received 10,000 emails per year (9). As the total number of workers in the UK (10) is very conveniently close to the number of seconds in a year, this makes for around 10,000 emails received per second.

Naturally, the modern internet is much more than just a place for working or and making or stealing money. More and more of our social life involves the internet as well. Facebook for example has a reported 890 million users worldwide every day, liking 3.125 million things per minute (11) The Guardian reported that 24 million UK users use the service daily (12), which suggest that approximately 2.7 percent users of their users are in the UK, which gives us a figure of around 1400 likes per second in the UK on average. This is equivalent to the entire population of St. David, the UK’s smallest city (13) mashing the like button every second.

Twitter, by contrast, has 307 million active users worldwide (14) - about 15 million of whom are in the UK (15). If people are still tweeting at the previously reported figure of around 500 million time per day (16), this suggests a tweet rate of around 290 per second.

Of course, the UK also loves music, with the BPI indicating last year that we were on target for 25 billion total music streams over this year (18) which is about 800 per second.

It's enough to make you proud of this great nation of ours! If you want to ask about how we found these numbers, or anything else this article has made you think about, then please comment below or email matt.leach@circusstreet.com.